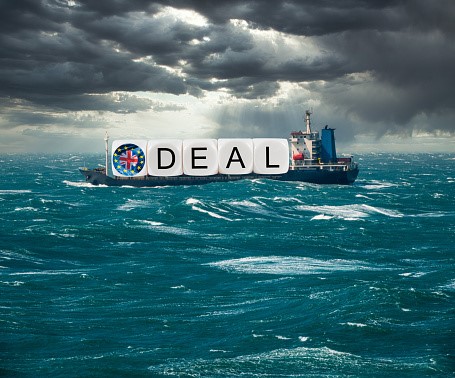 We at Exoshock have been asked to look closely at the range of outcomes for UK Ltd with regards to post-Brexit and the consequences of reduced or enhanced trade over the next 12-24-36 months.

As an aside, “It’s tough to make predictions, especially about the future.”

Way back in 2008 even the Queen asked the basic question ‘It’s awful – Why did nobody see it coming?’: The Queen gave her verdict on global credit crunch.

And a number of distinguished economists tried to respond (with the usual excuses and ironies): Queen Elizabeth Told How Economists Missed Financial Crisis | The Daily Bell)

“In summary, your majesty, the failure to foresee the timing, extent and severity of the crisis and to head it off, while it had many causes, was principally a failure of the collective imagination of many bright people, both in this country and internationally, to understand the risks to the system as a whole.” – Telegraph

The 2007-2008 financial crisis demonstrated the erroneous nature of the mainstream approach to economics that was widely used at the time. These methods, although discredited multiple times in recent history, are still being widely used (General Equilibrium theory and the like). The 2007-2008 highlighted the need to for alternative approaches that could break the fallacies of that sort of economic thinking. Despite the economy recognised as complex and interactive system of many parameters and non-linear relationships since late 17th century, the efforts to understand the complex and dynamical nature of economic behaviour have never been a mainstream focus.

Presently, many economics consultancies all offer a similar but slightly different take on the UK economy and its recovery (or not) prospects – from Oxford Economics to the Bank of England.

These institutions have all applied their vast intellectual and manpower resources to these questions, and the results are interesting. For example, Oxford Economics recent study in the end of 2020 concluded that UK’s strong recovery from the 2020 lockdown hit “has all but petered out” by the end of 2020 but then offered some arguments for “hope” in 2021-22 period. However, the main problem with this research is that their approach is still anchored in some variant of the mainstream General Equilibrium standardised ideology for modelling macroeconomic environments (and we know how well it worked out in the past).

2021 is the first year of the Brexit and a lot of emotional and analytic commentary went into discussion and prophesising possible impacts of the EU trade disruption on the UK economy and whether it will recover from that – if ever.

Exoshock does not have the manpower of the main-street economic consultancies but it has built an advanced causality-centric macro-economic model of the world, which allows us to run trade (and many other factors) disruption scenarios for the UK economy and study the propagation and the magnitude of shocks and their consequences in specific circumstances.

Exoshock has the unique ability to translate both real world economic data and a range of other data streams, run them through our modelling platform and generate outputs that demonstrate the impact and risks on real economies and society.

Our platform also has the unique capability to allow for causal tracing within the network of relationships and demonstrate exactly why these and other things happen in a particular way.

This allows for proper and credible risks, foresight and scenario planning.

We were therefore asked to apply this intelligence and capability to the UK trade disruption scenarios. To that end we have created a network model of European countries, China, US, and Rest of the World and their bilateral trade relationships among each other and with the UK.

The results of our simulations are actually very positive for UK Ltd with or without factoring in new trade deals around the world.

To see what it may look like in the case of trade disruption shock for the UK, we have investigated several simplified scenarios, the main one being 20% cuts to the UK exports on the account of the trade dropping with the EU and other countries, and no cuts to imports (the unfavourable scenario for the UK).

What will happen to the UK GDP if the said trade cuts (a) never recover (“doom and gloom”) or, (b) if intelligent trade deals are made by the UK, the trade cuts could be partially recovered by the beginning of next year?

Given that UK exports to the EU have been running at 43% (Statistics on UK-EU trade – House of Commons Library), we think that 20% drop in exports would be a reasonable disruption range.

The results of the simulations for the trade disruption are shown below for the real GDP:

In comparison to the base case (business as usual without trade disruption effects), the trade disruption will cause the near-term slowing in GDP growth. “No trade recovery” scenarios have produced longer lasting disruptions lasting to the beginning of 2023.

The recovery in the model is driven by the balancing feedback that drives international trade. The lowering in demand will cause the exporting firms to compete on price (UK will earn less over that period in exports) and become more competitive.

Assuming a positive and intelligent strategies from the UK government to boost such a recovery, these developments will help the UK to become more competitive in a rebound from the trade shock and result in higher real GDP than in the standard case by 2023. In all scenarios, a strong recovery from the trade shocks will become evident by the end of 2022.

Despite Brexit the UK economy can bounce back fast and strong by late 2022.

And of course, we can run a lot less simplified disruption scenarios, across a multitude of different areas (climate, geopolitical risks, trade and capital flows) all the way from single or multiple countries and their networks. The Exoshock platform has high potential for disaggregation depending on data availability which can allow to zoom in to specific industry sectors, supply chains, and, at the limit, even single companies.